Blog
‘I’ll Drink to that’ at Z Energy 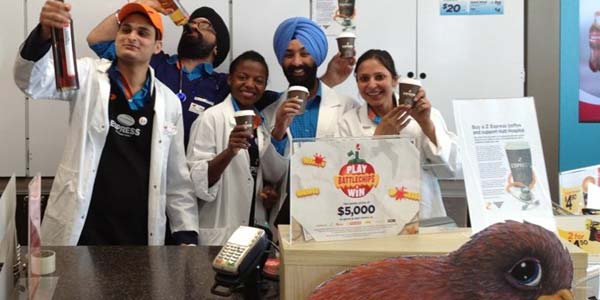 A campaign at Z service stations has raised $16,000 for the children’s ward.

Eleven Z stations in the Hutt Valley, Kapiti Coast and Masterton pledged to give 50 cents to the foundation for every coffee bought during a fortnight last November.

For the second year running the Lower Hutt -based owners of 11 Z stations will show their support for the Hutt Hospital Foundation, an organisation close to their heart.

The owner of the participating Z stations, Raswinder Singh, says staff were moved by people’s willingness to caffeinate and donate for local sick kids. “Z is proud to serve the local community through various initiatives and the staff really enjoyed the opportunity to don scrubs and stethoscopes for a great cause.”

The decision to be involved with the Foundation was an easy one, Mr Singh said. Children resonate with everybody so it was easy to gather community support. “We even had people who said we don’t want a coffee or a hot chocolate but here’s $3.80,” Mrs Singh said.

When the couple’s 18- month old son was admitted to the hospital for two days last year they were impressed with the service, she said. “We walked up and down this corridor and it gave us a real appreciation for the extra stuff … the pictures on the walls and the toys.” Though he was admitted with a strange rash and put into isolation he was later released after it was found not to be serious.

When kids are in hospitals and being poked and prodded they don’t understand what is happening, she said. It is important they are made to feel as comfortable as possible. “They had a gold fish bowl and that’s not a big thing but that’s a 15- minute conversation with a toddler.”

A lot of the money raised this year will go towards these kinds of “distraction therapy” techniques for children.