This winter has been extremely busy with high volumes of very sick children presenting to the Hutt Valley Emergency Department for respiratory type illnesses. The emergency department has been very fortunate to have the latest form of treatment in a Fisher and Paykel high flow ‘Airvo’ machine donated by the Hutt Hospital Foundation Trust earlier this year. This machine is used to help treat children with moderate to severe respiratory distress by delivering humidified air or oxygen at high flows in an attempt to reduce their work of breathing. In addition, it also reduces their length of stay in hospital. Due to the increasing demands of this therapy for our sick children we are currently trying to fundraise for a second machine due to high demands.

The Emergency Department has been fortunate enough to be donated toys, books, DVDS and TV’s by local businesses to provide distraction therapy to children who present to ED. Distraction therapy is crucial to the children’s well-being whom are vulnerable from illness and are in an unfamiliar environment. They assist staff to carry out tests/examinations which are often distressing for the children.

On Saturday a little boy called Benjamin was brought into the Emergency Department by ambulance in the arms of his mother. Benjamin was critically ill and immediately upon arrival to the ED was placed on ‘Airvo’ to assist with his severe respiratory distress. 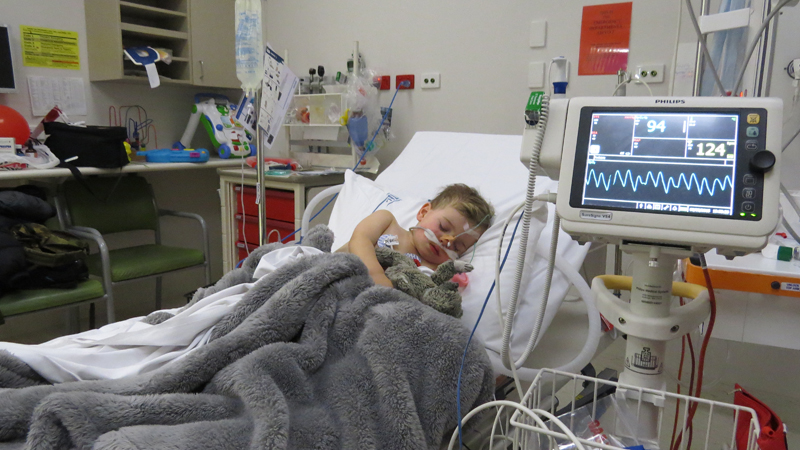 The efficacy of ‘Airvo’ is demonstrated by Benjamin’s mother Nicole, in the story below.

Since Benjamin was 8 months old we have had multiple hospital admissions relating to respiratory issues about every 4-6 weeks. He is now 21 months old.  Benjamin came home from care Thursday afternoon with a runny nose. By Friday this escalated to a persistent cough accompanied with a fever, vomiting and periods of inconsolable crying. Early Saturday morning I noticed Benjamin struggling to grasp each breath, his stomach caved underneath his ribs and his neck tugged with every inhalation. His mouth turned a light shade of blue and he had moments of unconsciousness from the strain his body was experiencing attempting to take each breath. An ambulance was called and arrived within minutes and the paramedics reacted quickly. Benjamin’s breathing was supported sporadically as they rushed us to the Lower Hutt emergency department.

Upon arrival the team of doctors and nurses worked quickly so Benjamin received high flow oxygen therapy and active humidification provided by the ED airvo machine. Soon after, I noticed a reduction in his breathing effort We spent a lot of time in ED waiting for a room in the intensive care unit as the hospital which was at full capacity.

After two days on the Airvo machine Benjamin was slowly weaned off and we were able to be moved into the children’s ward and discharged a day later. The care we received was very efficient and I was particularly impressed with the distraction therapy techniques that were offered especially in the emergency department. Having access to the Airvo machine in ED is a great treatment as it not only helps children in respiratory distress but it also reduces their time spent in hospital.

Due to limited funding there is no money for the Airvo machines in ED yet I feel it was such a vital component of the respiratory care for my son.

Fundraising has allowed Benjamin to receive treatment from the Airvo machine from the earliest point of his medical care in the ED department, for which I am truly grateful.