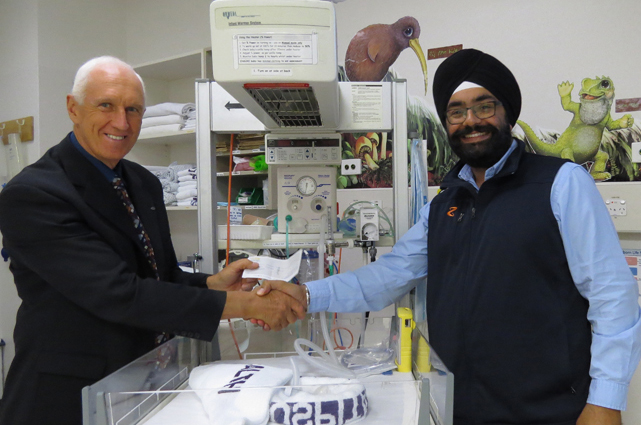 Babies in the Children’s Ward in Hutt Hospital can now breathe easily and safely with the addition of a new piece of equipment that prevents risk to babies as a result of them receiving air containing high levels of oxygen. The device is called an oxygen blender that is a mixing device that permits you to mix oxygen with compressed air, either from a wall outlet or from a tank. Blenders have input ports for two separate gases, which are usually oxygen and medical air.

This controlled oxygen-air mix can be varied so it is suitable for each individual patient that is so important in babies. The ability to provide mixed air and oxygen in a safe, easy and controlled manner in a critical care environment is becoming increasingly important.

Raswinder Singh of Z Energy presenting Chairman Steve Nickson with a cheque for $3,000

Z Energy has come to the rescue of the Hutt Hospital Children’s Ward again. Having previously improved conditions for the children by providing new beds, bedside lockers and TV/videos, this equipment will play its part in making their stay a safer one. And just so the parents didn’t feel neglected, Z Energy previously refurbished the parents room with new furniture, paint and a large screen TV.